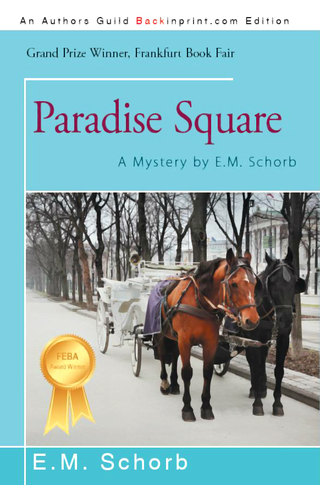 "Many mystery fans know that the father of the genre was none other than Edgar Allen Poe. In Paradise Square, a remarkable novel by E.M. Schorb set in the 19th century, Poe himself assists in the investigation of a young woman's murder. This thrilling and satisfying work, which shared the Grand Prize at the Frankfurt Ebook Awards, delves into the mystery of the killer's identity and also explores the spotty record surrounding the end of Poe's career when he disappeared and was later found dying, apparently as a result of a drinking binge.

"Schorb brings Poe to vivid life as he joins Officer Goode—a 'leatherhead' as municipal patrolmen were nicknamed for the thick helmets they wore—in investigating the grisly slaying of a street vendor. Initially recruited to clear the name of a West Point friend, Poe is drawn by his fascination with mystery and deduction into aiding the inexperienced officer. Goode himself, who owes his appointment to political connections, suspects his assignment to the case is based largely on his inexperience, and that he was never intended to learn the killer's identity.

"Throughout the novel, Schorb inventively finds ways to mention true aspects of Poe's life. The reader learns that he attended West Point but left after too much gambling and drinking, that his parents were actors, and that his name, if not face, garnered instant recognition among the literate then, just as it does today. More impressively, Poe's character transcends factual details and achieves life as a brilliant, haunted Southern gentleman.

"The novel's title refers to a tiny square in a New York slum where the murder victim was found. Events radiate from this locale, encompassing many little-known aspects of the slums of a young New York. The reader joins Poe and Officer Goodman in exploring the squalid taverns or 'diving bells'—known today as 'dives'—of the slums, the homes of reformers and the lodges of some of the many groups that are at once social club, street gang, and political clique.

"In 19th-Century New York, where these gangs exerted powerful influence, even fire service was provided by rival groups. In an amusing episode, Poe intervenes to prevent a member of one gang from obstructing a fire hydrant's use by another gang crew. This small taste of ruthlessness and rivalry foreshadows the lengths to which these gangs will go to maintain their control. Like the House of Usher looming over its moor, the specter of the corrupt Tammany Hall political machine casts its shadow over the pair's investigation.

"By mixing elements of the historical novel and the conventional mystery with a speculative reconstruction of Poe's final days, Schorb has crafted a fascinating tale. He does great honor to Poe's memory and fame as the father of the genre. The scribe would be pleased with his protegee's work."