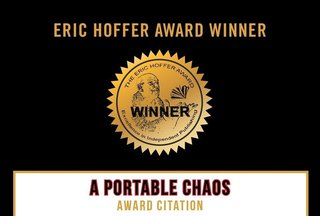 A Portable Chaos opens with a stream-of-consciousness flash-back to a childhood incident that resembles James Joyce’s “Portrait of the Artist as a Young Man,” which gains significance as the novel unfolds, and you come to appreciate it. The main character is a decent guy overflowing with untapped potential, who walks away from opportunities and the wrong sort of success and follows his bliss as a poet. After a pretty squalid time living “la vie Boheme” (vividly written, conjuring up the ghosts of 1960s’ past), he emerges from the slough and finds validation, the girl, fame, fortune, contentment, and reconciliation with all those pesky childhood demons.
This is a well-plotted, well-charac-terized, and solidly written story. A Portable Chaos has everything you want in good literature—poignant writing, drama, and redemption.

The US Review of Books 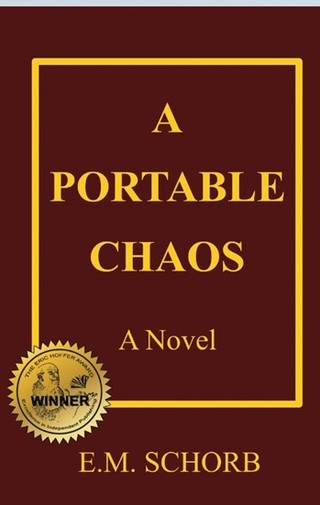 Here is a deep rework of a book by the same title published in 2013, which was itself a revision of an earlier novel by the same title.  You should keep it in mind, not only to avoid purchasing an older version if what you want to purchase is the present one, but also to help you understand how important this novel is for its author, as a part of his art if not as a record of his life.  Schorb and I, as well as his main characters, Jimmy Whistler and his friend Marsayas, the Zoroastrian hippie, belong to the generation of men who were possible or actual cannon fodder during the U.S.A. war in Vietnam, the generation that witnessed the end of the dominant myth of American difference, or American innocence.

Schorb's novel involves us in the ups and downs of a poet, Jimmy, who struggles to remain a poet in the slipshod whatever and what-for of our everyday life, a struggle made harder by Jimmy's other talents, which open for him the way to tempting alternatives to poetry, such as writing for TV.

The death of a dominant myth is fraught with mortal dangers for a civilization, since it opens the field to polar-opposite, irreconcilable myths battling for dominion: in our specific case, the myths of an America whose history is a series of crimes against humanity versus an America that used to be great and ought to be made great again. To escape from the resulting chaos we may choose out of a variety of options on offer: from all sorts of nepenthes, opioids, and booze, to which last Jimmy is addicted, to recourse to antique and distant myths, like Marsayas who clings to the Zend-Avesta, or like many other hippies who prefer the Tripitaka, or the Tao te Ching, made to appear less distant in translation.

Jimmy is a poet, in touch with the source and the seed of myth. For that reason, and for the passion and intensity of its writing, this novel should be of great interest to the poets and readers of of(f)course.

More than half a century ago, trying to find his way out of the chaos of a dysfunctional family that suffers from a dark secret, eighteen-year-old Jimmy Whistler joins the Marines and is sent to Hawaii, not yet a state, where he meets a fifteen-year-old girl, Leilani Kona, who turns out to be the love of his life, his own “Sweet Leilani;" but, due to her age and his sense of honor, their love remains unconsummated. Later, shipped back to the mainland and discharged from the Marine Corps, Jimmy makes a false start in New York City as an actor, falling in with a show business crowd, and, still later, with a band of hippies, all the while trying to perfect his true calling as a writer who is attempting to discover order in a chaos that now appears to be not merely personal but public. How Jimmy and Leilani find each other again in the midst of this private and public chaos is a story both comic and tragic.
A Portable Chaos is an historical novel that brings to life the transformation of the United States from the conforming Fifties to the volcanic social eruptions of the “swinging” Sixties—from the private chaos of Jimmy Whistler’s childhood to the public chaos of his youth, the former shaping himself, the latter shaping all Americans.