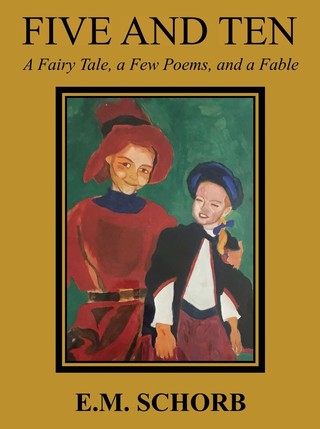 Cover Painting by the Author

Five and Ten, by a prize-winning poet and novelist, contains a fairy tale, a few poems, and a fable for children, illustrated by the author's young daughters, and featuring a cover painting of them by the author.

"A Fable," first appeared in "ELM: Eureka Literary Magazine," edited by Loren Logsdon, nominated for a Pushcart Prize, and also in "The World of English," China, with Chinese translation.

The poems first appeared in the following publications:  "The Caterpillar," "Lucid Rhythms," "Rattle & Rictus," "The South Carolina Review," "The Dirigible Balloon," and "Spring: A Journal of the E.E. Cummings Society."

E M Schorb's command of language is his greatest strength.  He is acutely atuned to the usage and colloquial expression of people, places, and times. FIVE and TEN, once again, comes alive from his language; language used to capture the imagination of children (and older people too). Starting with The Golden Squirrel, a classic fairy tale, I felt transformed into a golden squirrel, comforted by a happy ending.

As his title suggests, FIVE and TEN is comprised of a fairy tale, a few poems, and a fable.  Those few poems provide a bridge between the fairy tale and the fable; a bridge designed to provide that rare gift, a depth of thought in young people.  Starting with the disconcerting GHOST SHOP that probes the transparent veil between life and death, and continuing in that vein with The RIDDLE OF THE CLOCK, which really asks 'what is time' that 'saving grace' that takes us from 'childhood's hour unto death we go; what time it is we seldom ever know'— these poems are framed by the mystery of time and the mystery of life.  MONSIEUR ELAN asks for more contemplation: is our life driven by 'elan' and other motivators that pursue us until the end? The SOCK PUPPETS SONG is a joy to read, a light  touch indeed.  These few poems end with 'it must have been the angels on the head of pin who wrote the Bible on a grain of rice':  once again asking about the mystery of faith, the mystery of life.

Having crossed the poetic bridge, we reach The FABLE, which is set in a place where beggars and poor people go to tell tales.  Central to those tales is O'Shay, the Irish Shaman, a character that appeals to my Irish nature, and indeed to Ireland, a land of fables itself.  Once again, E M Schorb's magical heart turns the swirl of the clouds overhead into a white stallion that 'could blow back the floozy wind from Manitoba down to the plains of old Mexico.'   Matching that wonderful white stallion to blazed-faced bride, Bonny-Pru, made him vanish from the land, never to return again.  The poor people were on their feet, like freed horses, whinnying and galloping in place.  O'Shay had turned them into free and happy horses.

So FIVE and TEN ends in a happy place, guided there by Schorb's creative heart.

Pat Mullan is a thriller writer, poet, and artist. You can visit him at: www.patmullan.com.